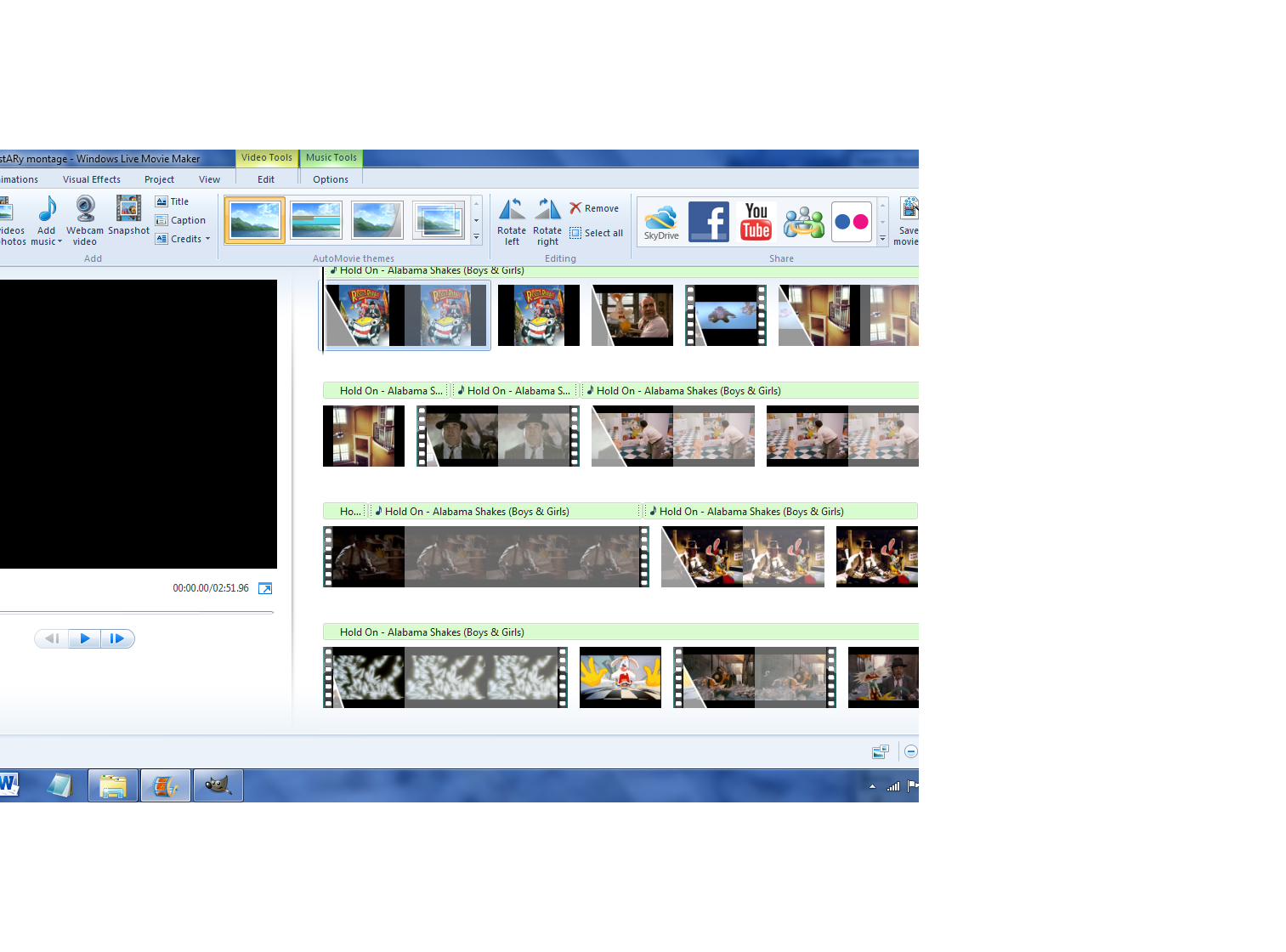 Posted by Jacob Greene at 9:38 AM No comments: 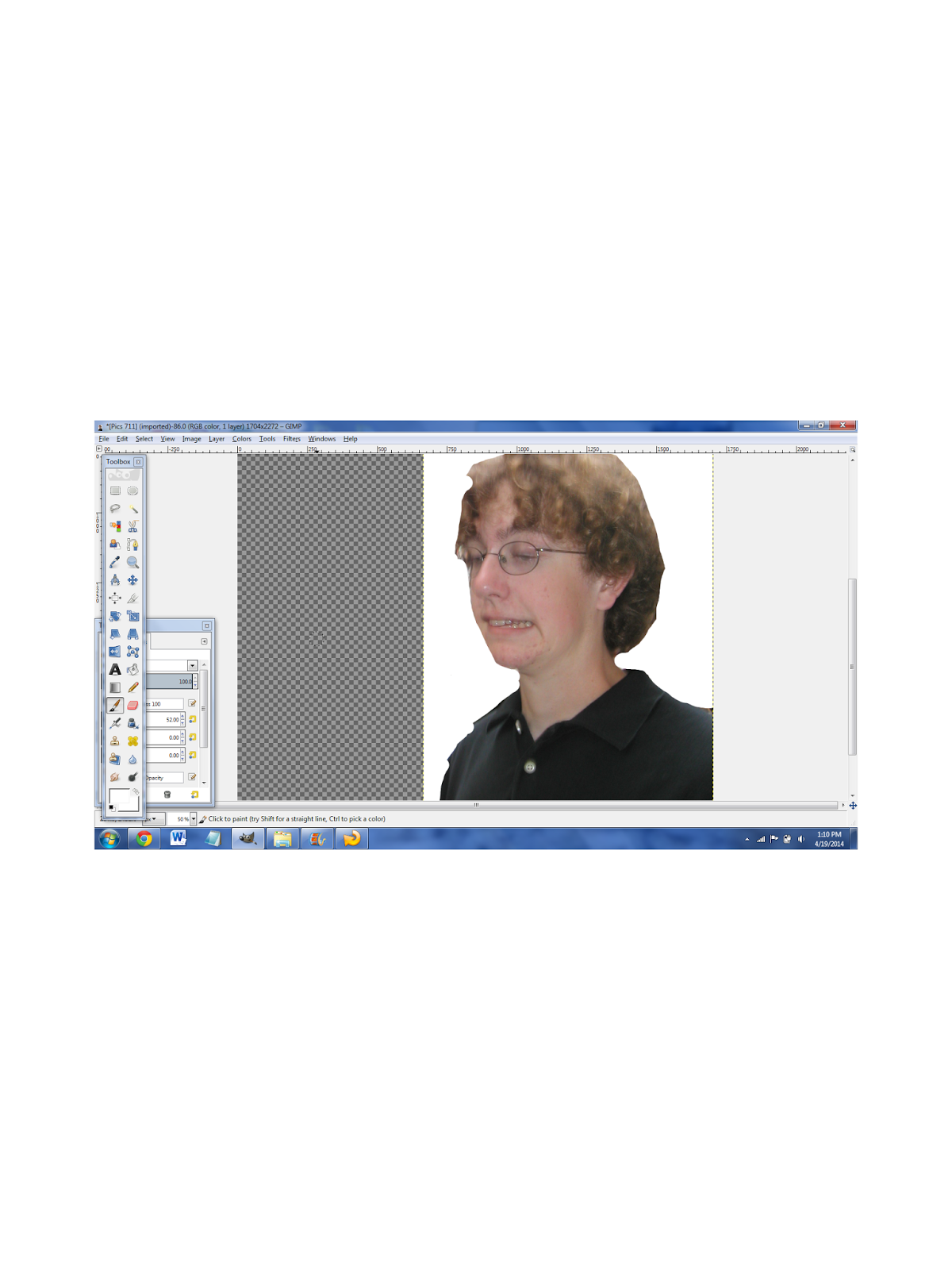 I used GIMP to erase the background of several images of myself from my early teenage years. This process of contextual erasure was peculiarly illuminating in the way that it allowed me to isolate something about myself from these images that I had never noticed before. I suppose part of it is that I had seen the images so many times before that they had lost their "punctual" potential, always arriving too early in my visual memory to initiate a genuine felt. But by erasing the scene, I began to see hints of the de-contextualized (deconstructed) version of my identity that had been inaccessible due to the noise of my surroundings. I was reaching closer to the objet petit a which, as Ulmer says, is simply "me."

Posted by Jacob Greene at 4:56 AM No comments: 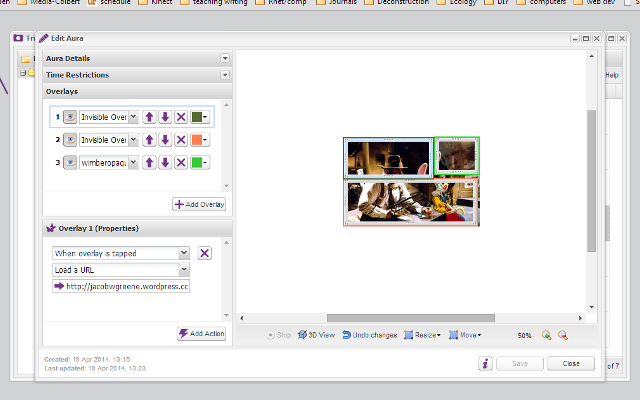 This is a screen shot from Aurasma Studio. I used the Aura overlay feature to hyperlink different regions of the trigger image. The upper right are is filled with a translucent head of John Wimber, the protagonist from the Community section of Mystory.  I linked his image to a post from the Entertainment section of Mystory where the logic from the two different popcycles overlapped. The upper left area links to a post explaining the importance of this particular scene from Who Framed Roger Rabbit?, and the bottom area links to a short YouTube clip of the scene itself.
Posted by Jacob Greene at 4:47 AM No comments:

My guiding instruction for my final poetics posts actually comes from my Julien section.

“The general who wants to win the battle and the painter who wants to capture the landscape must not acquiesce their inner desire and force it upon the world, rather they must observe the tendency of the world itself and locate the points at which the world’s tendencies converge with their own.”

Essentially, don’t try to control the production of felts, but rather wait to receive them. This point coincides with the final point from the first post of my poetics using the topic modeling software: electracy is interested in the unconscious fluidity of experience.

Intersperse moving and still images in your experiment because each genre conveys a unique relationship to time. In addition, don’t try to control the flow of events in a filmic felt as you won’t really know what you have made until it is finished and you notice how the disparate moments you originally focused on have been reconstituted by their relationship to the whole film.

Although we have focused mostly on visual felts throughout the semester, I don’t see a reason why we can’t use audio in our production of felts considering that music is perhaps the most visceral form of artistic expression and one that we also happen to share with other animals.

From this, I am going to produce a short video/photo montage experimenting with some of the slow motion techniques mentioned in The Cinematic as I circulate back and forth between the temporal registers of still and moving images. In this way I hope to hold true to my instruction that “there is something of the still that is only discernible in its relation to the moving.”

Since it is important to “observe the tendency of the world itself” for this part of the experiment, I will spend most of my time in the editing phase so I can test out a variety of compositions and note the serendipitous juxtapositions that arise from the technology itself. I’m not sure what images to use for this project. Perhaps the Community and Career sections, using moving images for Career and still images for Community which might work to formally reflect my conception of these aspects of my life. My career is moving forward, constantly changing and adapting to circumstance while my community remains the same, in the past.

Posted by Jacob Greene at 9:06 AM No comments:

This quote from the middle of my Prezi was useful for grounding my theoretical points about the role of absence in electracy: transition from image to image is the thing (the limit) which is “present only in the form of absence.”

According to another one of my quotes, this “thing” or “limit” is the subject: “Thinking is the subject’s search for the thing (the real) whose very refutation makes it (cogito) possible.” As a visual genre, the photo montage most effectively captures the conductive movement that characterizes the subject’s unconscious.

From this I want to create a photo montage in the spirit of David Campany’s notion of “late photography” by returning to those sites of wreckage that are passed over every fifteen minutes or so in the media blitzkrieg of instant access. However, my “sites of wreckage” are not physical sites but digital sites such as old memes or stories of pop culture that have since been relegated to the cyber-refuse bin.

This would be a good project to use material from the Entertainment and Family sections of mystory. Perhaps even interspersing my subjectivity in the moment of transition between a still of Who Framed Roger Rabbit? and a familiar family photo.

In this project, I will be following Lacan’s instruction by noting that repetition can be characterized as the search for the moment in which an event “seems to be under an obligation to yield itself” (i.e. the real, “original” encounter) (51). Movement is important here because encounters with the real are not static: “you cannot be stationary in your attitude toward something that is moving.” The real is moving and inaccessible, and I can only circle it through this transition that conveys the illusion (the veil) of an encounter with it.

In choosing individual images for this montage, try to follow this advice: “create an image that brings you to the point of action and then stalls, allowing the imagination’s invocatory nature to carry you into the here and now of the present only to have the image pull you back to the precipice from which you threw yourself. This is the “unresolved oscillation” of viewing experience (60).”

This would also be a good project to explore the rim-like movement described by Lacan and extrapolated by Christian Metz in his chapter of The Cinematic. In this quote from my mapping project, Metz seems to be telling me to create images that allude to off frame elements: the absence of the off frame element must be evoked by a feeling that is within the image’s frame. Similar to the temporal tension between past and present that I discussed earlier, this punctum propels the viewer outside the frame of the photo only to discover that the “thing” she is in search of was always already the lack initiated by an element within the image itself. This is Lacan’s image of the rim as a diagram of the movement of desire, entering into the gap only to return from where you came.

Posted by Jacob Greene at 8:40 AM No comments:

For my next few posts, I want to push my instructions for my experiment further into the electrate realm by positing more specific techniques to try out for my project while referring to the data gathered from the first two posts of my poetics.

One of my favorite quotes from my Prezi mapping is “represent the objet petit a by creating circuitous images of displacement while keeping in mind that to ‘get at’ what is ‘not-get-at-able’ you do not actually ‘get’ there, you can only circle it.”

I think this would be a great conceptual starting point for creating some augmented reality images using Aurasma. By overlaying virtual images onto physical images I could formally enact the “not get at able” and use the photos that I created in mystory as the visual material for these virtual (unconscious) images.

To keep this project from depending too much on technological gimmickry, I need to find images that generate a punctum, overlaying these onto less engaging and/or staged (dead) photos such as portraits.

A good place to look for punctual images (at least for me) is my photos folder, which contains a large amount images that I have seen countless times and immediately call forth a particular feeling from that time in my life. Maybe set your screensaver to slideshow mode and watch the images pass before you randomly, noting ones that create a punctum.

Because Aurasma allows you to link the virtual images, I could also link to particular sections of mystory, thus creating a circle back to the first part of the project and rereading it in terms of the material gathered in the second part.
Posted by Jacob Greene at 8:10 AM No comments:

In contrast to the distant reading approach of my last post, I read each set of posts carefully to find serendipitous connections. Each set of blog posts (Julien, Lacan, and Campany) orbits around a distinct term that seems to act as a kind of conceptual filter for the material culled from the text, popping up in almost all of my posts. For Julien, it was movement; Lacan, the unconscious; and Campany, absence.

I made a prezi exploring these connections for each of the texts, locating quote blocks near the term that they appear to be circling. The quotes in the middle relate to all three of the terms.
Posted by Jacob Greene at 7:42 AM No comments: